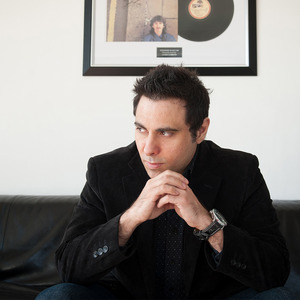 Haroon: From Pakistani Pop Idol to Dedicated Innovator and Instigator

Haroon is someone exceedingly rare: A pop icon who went from boy-band idol to cultural instigator and tech entrepreneur. That he’s made this journey in Pakistan, shifting the pop culture landscape despite political and social complexities, only adds to the power of his story.

Americans will get a chance to hear sounds spanning the pop pioneer’s storied career at SXSW 2015, as part of the first-ever Pakistani showcase at the festival.

Born in London to a Pakistani father and New Zealander mother, Haroon wound up as a teenager in Pakistan. Though his opera singer mother guaranteed the family home was ringing with music, it was no easy time to be a budding pop performer. During the dictator Zia-ul-Haq’s regime, music was more or less banned from the airwaves, and live concerts were few and far between. “It was an oppressive regime,” Haroon recalls. “My parents would take trips to the UK and I would beg them to record Top of the Pops. I would tune into top 20 in Britain via shortwave. We would buy bootleg cassette tapes and share with friends. There weren’t places to play, except school functions and small events.”

That did not stop Haroon. After he got his hands on a guitar at 13, he set about writing his own simple songs, trying to follow in the footsteps of artists he admired, especially the Beatles. With some schoolmates, he started his first band. Yet it was with his second band Awaz, founded once Haroon returned home from his studies at George Washington University, that he broke into mainstream success.

The moment that boosted the group’s rapid rise: Haroon had the idea to make a music video of one of the band’s songs. He heard that MTV was branching out into Asia, and sent it to producers at the channel’s new affiliate. Within a week, Awaz’s video was broadcast around the continent, the first song in Urdu or Hindi ever to be shown on MTV.

Haroon’s boldness and Awaz’s appeal pushed the envelope of Pakistani media and entertainment, breaking the band—and other pop musicians—into TV, touring circuits, and radio play. Even as a pop sensation, however, Haroon grasped he had to do more than croon about crushes: “Living in country like Pakistan changes you perception. You can’t just sing about love. There are other topics you are compelled to talk about,” he reflects. “Afghanistan was right next door and there are so many other issues challenging our country, from poverty to illiteracy.” Haroon has addressed what he feels are his homeland’s most pressing issues throughout his career, with songs like “Ghoom Ghoom,” a catchy, rollicking call for interfaith peace.

After a red-hot stint touring the country and making a follow-up album, Awaz parted ways. Haroon had no desire to rest on his laurels. He cut solo records and kept fine-tuning his songwriting skills. His most recent musical endeavors include an English-language album by alter ego Freddie Fiction, an homage to the songwriters who first fired Haroon’s imagination. Songs like the harmony-rich “Love Love Love,” a bittersweet, catchy call for love, peace, and meaning.

After Awaz and a few, wildly popular solo albums, the singer-songwriter turned his talents to a completely different set of challenges: music monetization in Pakistan and the country’s first animated TV series.

“There was a minor musical renaissance here in the 2000s,” Haroon explains, “because there were several new channels, and they all wanted music. But I was frustrated with piracy and the lack of opportunities for strong musicians to make any income.” Haroon gathered his fellow musicians together to begin the process of founding a Performing Rights Organization (the body that gets composers/songwriters paid for the use of their work) with help from SESAC. But he didn’t stop there: He went on to launch Pakistan’s first legal, monetized platform for music purchases via mobile phone, Taazi.com.

“Here I was, working on several albums, and I realized even if 20% of people want to pay for music, they can’t pay,” he notes. “The iTunes model fails here, because only 8% of Pakistanis have credit cards, but there are millions of mobile phone users. Musicians hold on to rights, can remove content at any time, and have access to a transparent dashboard. The majority of money, 70%, goes to the artists. Fans download a track, and their cell phone provider automatically charges their account.”

Other problems that confronted Haroon required a very different kind of answer. He heard about Taliban efforts to block young women’s education and knew he had to do something. He considered making a feature film, that then hit upon the perfect response: He drew on his decades of video production experience to create Pakistan’s first animated TV series, Burka Avenger.

The Peabody Award-winning show features a indomitable heroine—unassuming and unveiled school teacher Jiya by day, formidable and burka-donning superwoman by night—who combats the forces of ignorance and evil with mighty books and pens. The burka becomes a tool of progress, the perfect disguise for a powerful woman. “Female superheroes are often sexually objectified in the West,” muses Haroon. “We wanted to present some very different ideas of what means to be a woman fighting oppression.” Critics worldwide agree—TIME dubbed Jiya one of “The 11 Most Influential Fictional Characters of 2013”—and the show is up for a Kid’s Emmy.

Even while breaking new ground in other fields, Haroon’s heart never strays far from music. For his SXSW set, he’s returning to his rock-quartet roots, bringing a mix of his hook-laden Urdu hits and his new English-language tunes to Austin. “I’m bringing along some of my favorite musicians, some of the strongest players in Pakistan,” enthuses Haroon. “I can’t wait.”